Kibale Forest is the prime site in Africa for viewing chimpanzees in the wild. Some groups are habituated and provide superb and entertaining viewing! The enigmatic Green-breasted Pitta also calls this forest home as do quite a number of other primates and endemic birds.

There are 13 species of primates in Kibale National Park. The park protects several well-studied habituated communities of common chimpanzee, as well as several species of Central African monkey including the Uganda mangabey, the Ugandan red colobus and the L’Hoest’s monkey. Other primates found here include the black-and-white colobus and the blue monkey. The park’s population of elephants travels between the park and Queen Elizabeth National Park, and as they are mobile sightings can be a little hit or miss. Other mammals found within Kibale National Park include red and blue duiker, bushbuck, sitatunga, bushpig, the giant forest hog, common warthog, and the African buffalo. The carnivores here include leopards, African golden cats, serval, a number of different mongooses and two species of otter. Lion have been known to visit the park on occasion.
The bird life here is also wonderfully prolific, with the park boasting 325 species of birds, including the olive long-tailed cuckoo, western tinkerbird, two species of pittas (African and green-breasted) and the African grey parrot. The ground thrush is endemic to Kibale National Park. 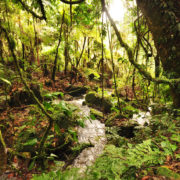 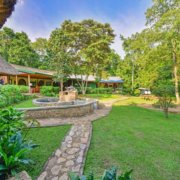 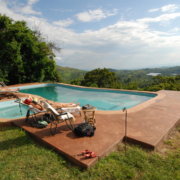 Contact us to tailor the ideal Great Ape safari