Unsurpassed natural wilderness, incredible reserve areas and a legacy of pioneering and revolutionary conservation – Zimbabwe has been a quintessential safari destination for decades.   Thanks to a changed political climate, Zimbabwe is now reemerging from a dark time into some incredible light and the future is very bright for a safari revolution.  Here is a quick look at some of the best safari destinations in this wonderful country as well as a sneak peak at 2 exciting new offerings…

Founded in 1928 and named for a Nhanzwa chief, Hwange National Park is the largest Park in Zimbabwe covering almost 15 000 square kilometers. It is located in the northwest corner of the country about one hour south of the mighty Victoria Falls.  Hwange boasts a tremendous selection of wildlife with over 100 species of mammals and nearly 400 bird species.  The elephants of Hwange are world famous and the Hwange elephant population is one of the largest in the world.  In the water-scarce landscape of Hwange, the provision of water in this National Park is critical to the survival of  large elephant herds.  The park has good predator density, so you can expect to experience the thrill of true African safari here.  Over and above this, Hwange is still home to the majestic Sable and Roan antelopes.  There is public access to the park, but we focus on safari in the excellent private concessions in the south-east, offering our guests exceptional and intimate game viewing away from the busier reaches of the reserve. 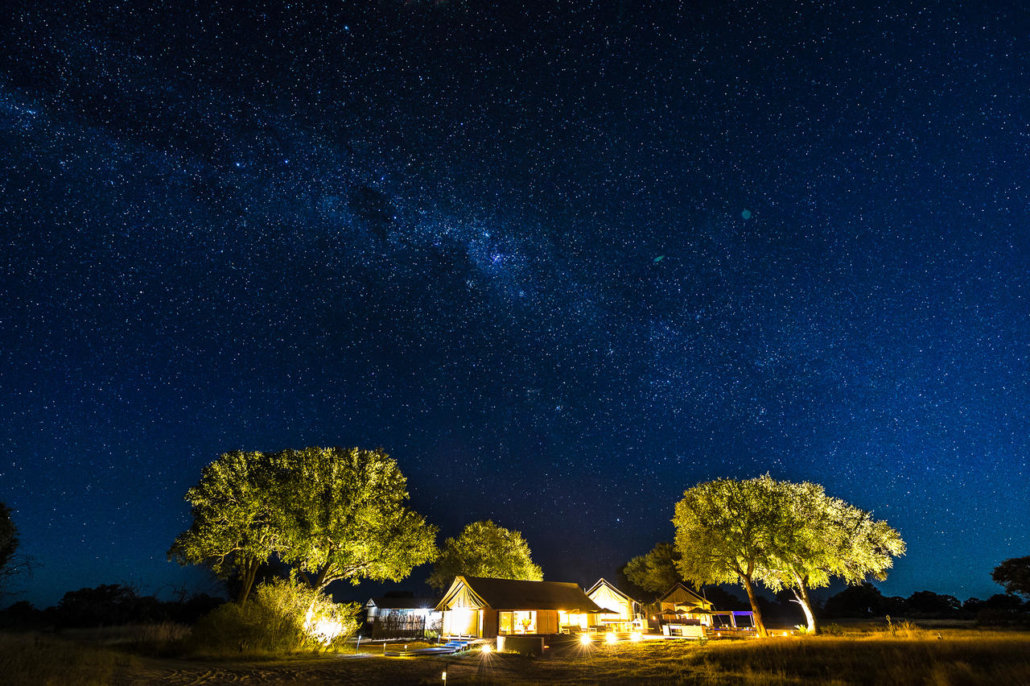 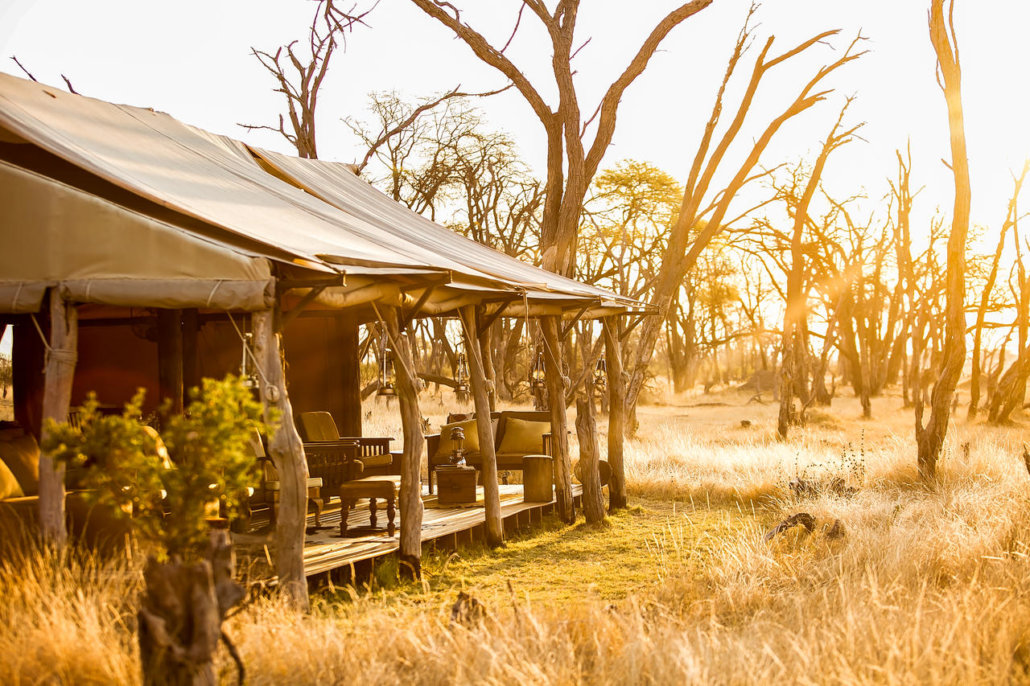 “The Hide” is an award-winning tented safari camp placed on the edge of a seasonal floodplain in a private concession of the Hwange National Park. A big attraction at this camp is the underground photographic hide at the waterhole.  One can follow an underground tunnel, and capture a view of animals just meters away as they enjoy the water.   The seasons of Hwange National Park will determine when to visit the park.  During the hot summer, rains fall between December and March the bush becomes thick and the wildlife disperses – making game viewing more challenging. In the winter months between June and October the bush dries rapidly and thins out.  It is at this time that water becomes the key to game viewing as all but a few waterholes remain.  The wildlife then tends to concentrate and becomes much easier to spot. 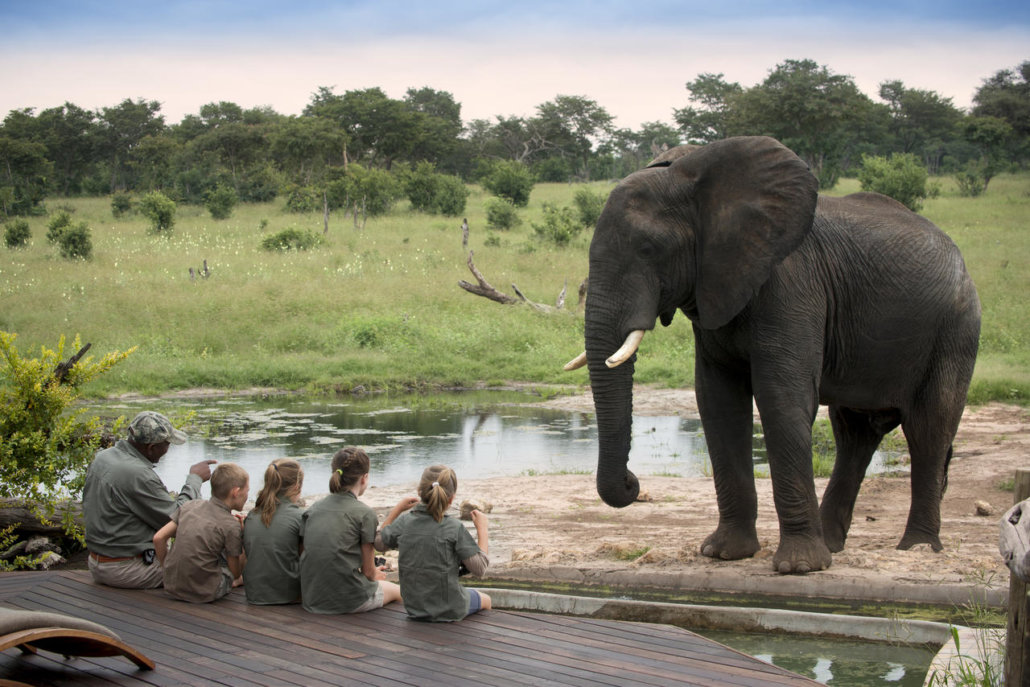 The elephant populations of Hwange National Park are impressive, as are the views and experiences.  One camp that champions the needs of children and takes such wonderful care of the young safari-goer is Somalisa – another of the private camp options operated by African Bush Camps.   Children should ideally be over the age of 7 and a programme of activities designed for the youngsters will keep them thrilled, engaged and entertained, whilst mom and dad enjoy a bush walk or lounging next to the pool.

Ask anyone that has been to Mana Pools on the banks of the mighty Zambezi and they will say they dream about returning!  The languid yet powerful river, escarpment views and stately trees are the backdrop for an awe-inspiring safari.  The list of conservation significant designations bestowed on this 200 000ha stretch of land in the North of the country is impressive.  Mana Pools is not only a UNESCO World Heritage Site, but is also afforded further protection as a Ramsar “wetland of international importance”. Not surprisingly then, Mana Pools offers up some exceptional safari options.  As with much of the safari offerings in Zimbabwe, the seasons play a critical role in safari planning.  During the rains of summer, most of the big game animals move away from the river and into the escarpment.  The animals will start to return to the riverine areas from around April, as the pans in the dense bush dry up.  As the year progresses towards the dry winter months, increasingly large herds of elephant and buffalo can be enjoyed here.

Game drives in search of African Wild Dog, Elephant, Lion and Leopard are exciting, but these are often seen on foot too as ‘Mana’ is famous for its walking safaris, where the game is remarkably tolerant of respectful humans on foot.  Canoe safaris are another great way to experience the wilderness here, including the numerous hippo and crocodile in the Zambezi.

Meaning ‘four’ in the local Shona language, Mana refers to the four large permanent pools formed by the meanderings of the middle Zambezi river. A 2,500 square kilometres of river frontage, islands, sandbanks and pools are all flanked by forests of mahogany, wild figs, ebonies and baobab trees.  This is one of the least developed national parks in Southern Africa and is also home to Cheetah and the brown hyena. 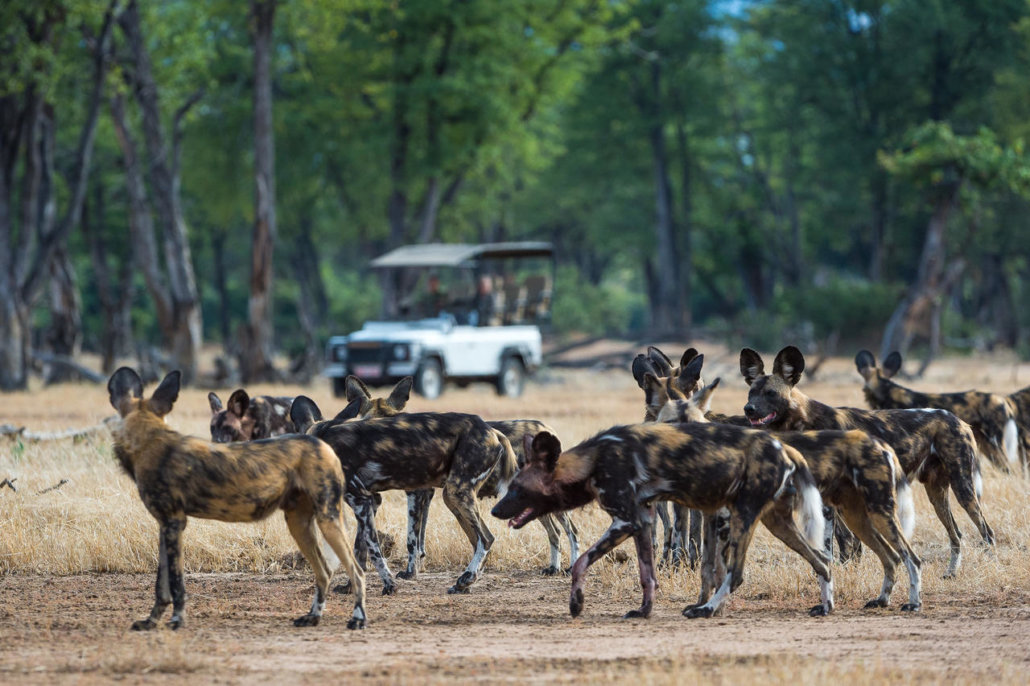 The African Wild Dog is one of the very special game viewing sights that a safari in the Mana Pools area has to offer.  These incredible predators have vast ranges and move incredibly quickly, but skilled rangers have mastered the art of interpreting the signs they leave and thus ensure good sightings as frequently as possible. 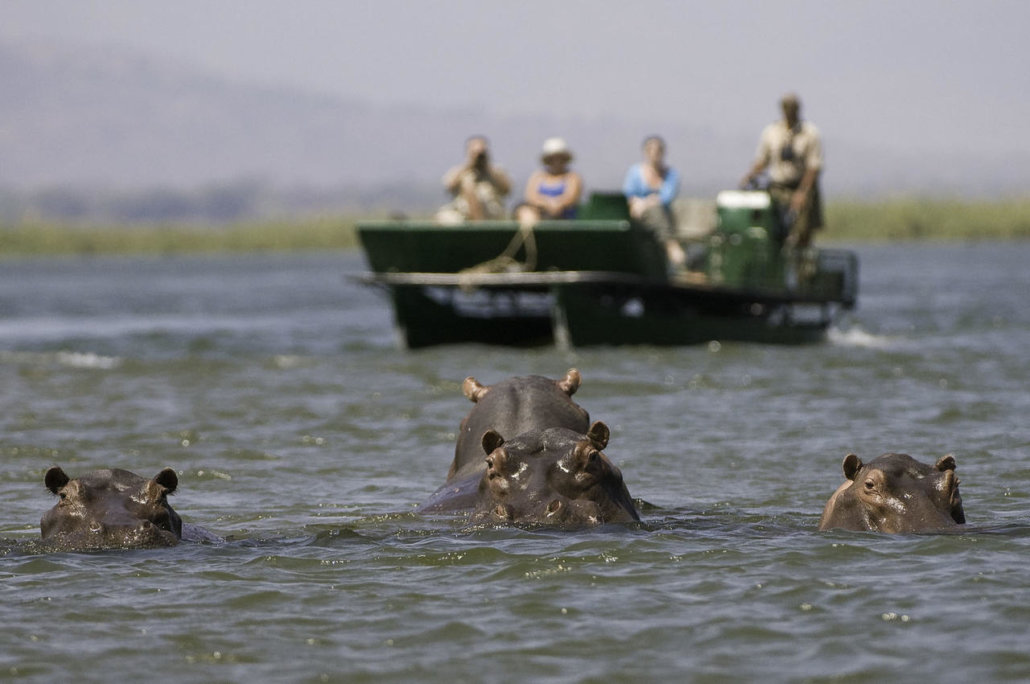 Water-based safari activities are also the order of the day in the Mana Pools reserve area.  Get up close and personal with the hippo (but not too close of course) from the waters of the Zambezi river.  The Wilderness Safaris Ruckomechi camp is situated on a large private concession in the heart of the Zambezi Valley’s Mana Pools National Park.  This remote and beautiful camp offers spectacular views of this iconic African river, sweeping across the tree canopy to the mountains of the Rift Valley escarpment over the border in Zambia.

Guests here thrill at the chance to enjoy a bath with a view as well as the opportunity to relax on a romantic “star-bed” open to the African skies a little away from the camp and overlooking a productive waterhole. 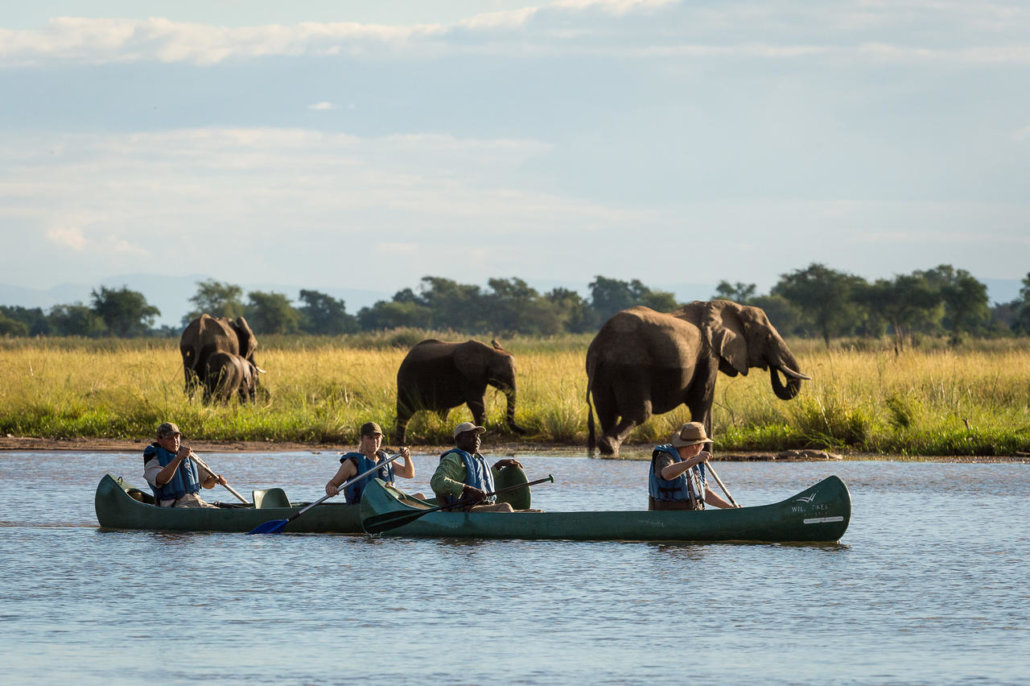 The Ruckomechi camp offers the wonderful opportunity to canoe down the river.  With expert guides ensuring that you are safe, you can enjoy some incredibly intimate views of the wildlife of Zimbabwe.

Victoria Falls and Zambezi National Parks are situated on the western tip of Zimbabwe.  The falls, known by the local Kololo tribe as “Mosi oa Tunya” or “the smoke that thunders”, is one of the “Seven Wonders of the World” and one of the largest and most spectacular waterfalls on earth.  These reserve areas offer wonderful safari options very close to the spectacle of the falls.  Zambezi National Park together with Victoria Falls National Park cover an area of 56,000 hectares. The northern border of the Park is formed by the great Zambezi River which also forms the border between Zimbabwe and Zambia for much of its length.  The Zambezi National Park offers some great game viewing, including the “Big Five” of elephant, lion, buffalo, leopard and rhinoceros.  In addition, herds of sable antelope, eland, zebra can be viewed here, along with the occasional giraffe.  The Zambezi River is home to a large variety of fish and is famous for its bream and fighting tiger fish, and some of the lodges will gear you up for a spot of Tiger fishing.   These reserves can be enjoyed as day visits, accessed from the nearby town of Victoria Falls, or one can work it the other way round and access the falls whilst staying at one of the lodges in the reserves. 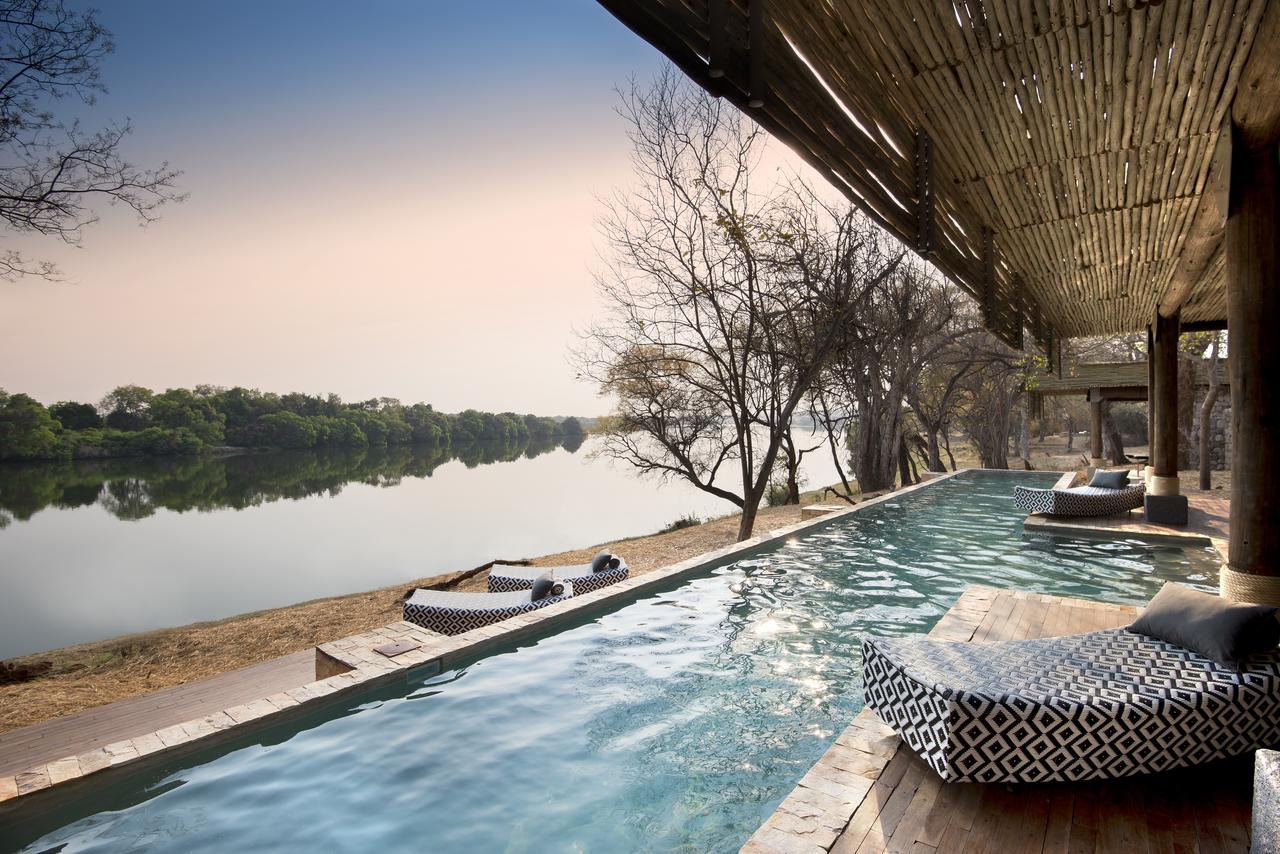 The andBeyond Matetsi River Lodge enjoys some 9 miles of private Zambezi River frontage and is a short trip from the Victoria Falls.  Here you can enjoy a luxury safari stay of the highest order with all the trappings and trimmings. 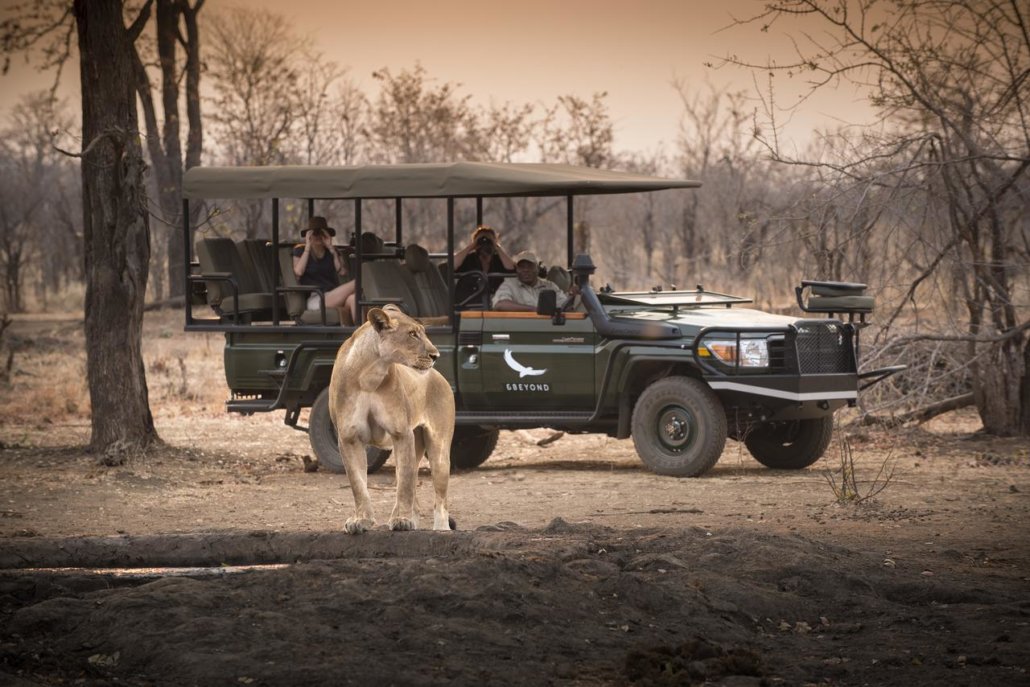 There is some great game viewing to be had too at the andBeyond Matetsi River Lodge. 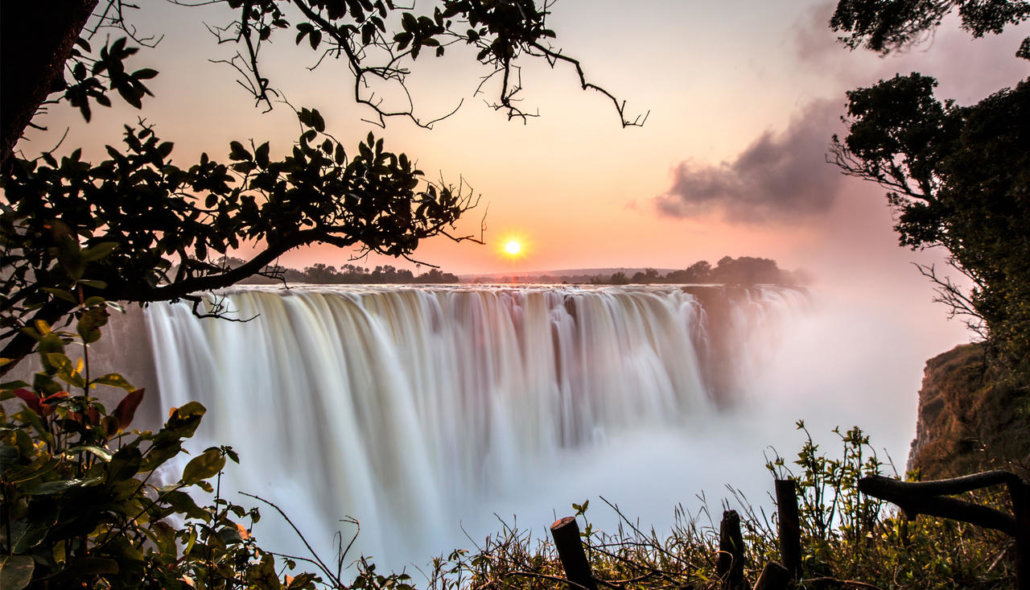 Views of the wonderful falls are best enjoyed when the waters subside a little, otherwise one can tend to have a largely vapour-obscured view.  Another benefit of viewing the falls outside of the wet period, is that your game viewing options are much improved in the drier winter months, both in Zimbabwe and neighbouring Botswana.  Should you want to twin a visit to the Victoria Falls with some exceptional game viewing in the Okavango Delta, then target June through to September

Gonarezhou and Malilangwe offer safari destinations to behold at least once in ones life – and having explored the area once, you will quite likely return time and time again.  There are numerous lodges and camps to choose from in Zimbabwe, making this a safari region for one and all in many respects.  The wonderful Singita brand has brought their combination of luxury, conservation and immaculate safari to this part of the world, in Singita Pamushana.  The Pamushana lodge is situated in the Malilangwe Wildlife Reserve, a 130 000 acre wildlife refuge that borders the Gonarezhou National Park.  The Singita Pamushana Lodge is managed by Singita on behalf of The Malilangwe Trust, a non-profit sustainable tourism initiative, and all proceeds from the lodge benefit the Trust’s numerous conservation and community programmes in the area.  The neighbouring Gonarezhou means “Place of Many Elephants” and it is here that you’ll find some of the largest-tusked elephants that remain in the world.   This is a diverse and beautiful piece of Africa that is home to a healthy populations of elephant and buffalo herds. There are also plenty of lions, cheetah, leopard, hyena and wild dogs to keep the herbivore population in check, and more than 400 different bird species. It is a wild and spectacular place that provides endless game spotting opportunities – in short a great safari destination. 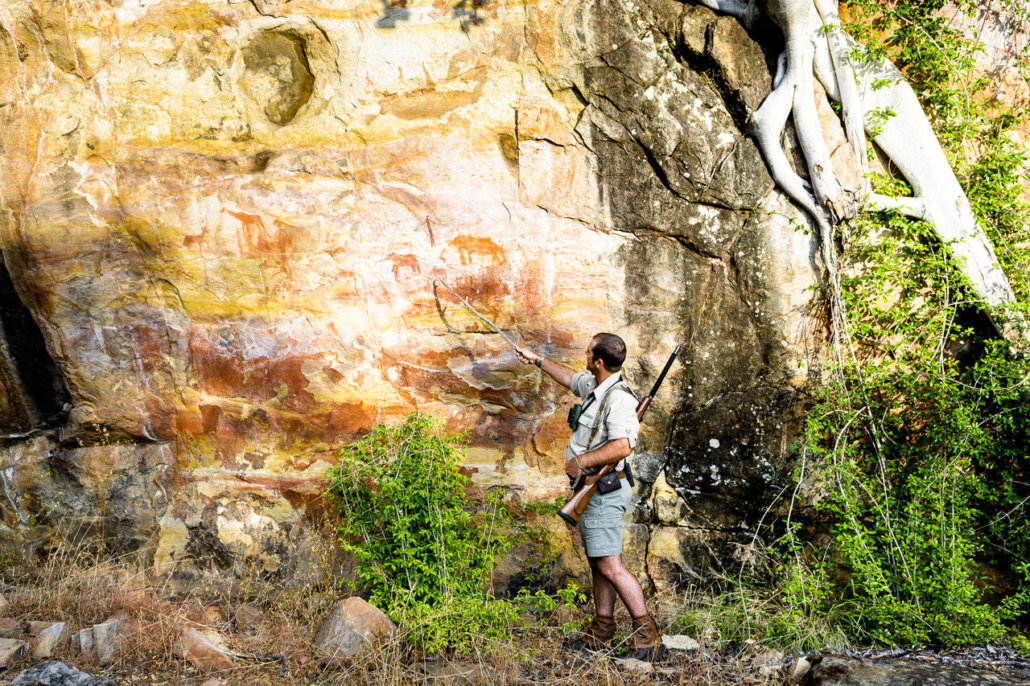 Aside from the wonderful wildlife of today, one can take an incredible safari back in the past with these wonderful rock art creations.  Many of the earliest paintings, some up to 2000 years old, are figurative and illustrate everyday scenes from the lives of the hunter gatherers who made them.  These include hunting scenes and animals like elephant, rhino, zebra and many other creatures of the bush including, most significantly, eland which were sacred to the San and represented rain and fertility.  The Singita team offer superb interpretive walks to the sites where one can step back in time. 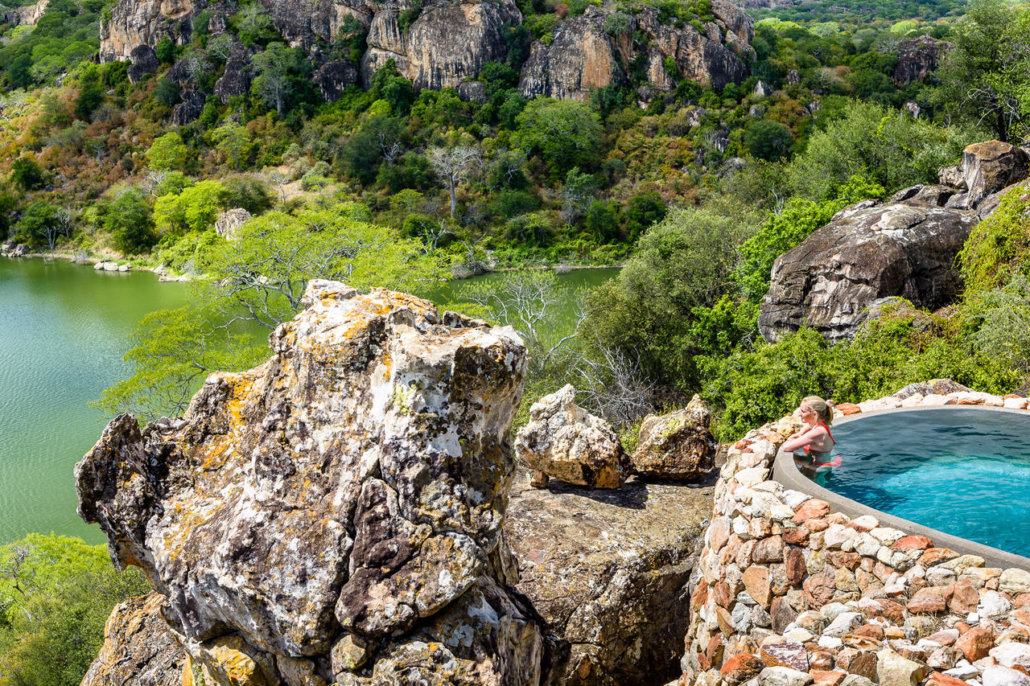 Perched atop a hill, with sweeping views from this elevated position, the Singita Pamushana lodge has brought the characteristic Singita signature of luxury to this remote piece of Africa.  No better way to enjoy the view than from the amazing swimming pool.

There are two new offerings that we are excited about in Zimbabwe, both are from two very well established and reputable safari operators.

Mpala Jena from Great Plains Conservation is a wonderfully exclusive tented camp on a private concession within the Zambezi National Park. Overlooking a beautiful stretch of the Zambezi River shoreline, four guest tents have been elegantly positioned under the dappled shade of a mixture of indigenous trees.  The camp is named after the natural spring-line, Mpala Jena, which runs through the centre of the concession, and which attracts an abundance of wildlife throughout the year, particularly during the drier months.  This camp is due to open in April of 2018.

The Stanley and Livingstone Boutique Hotel (formerly the “Stanley and Livingstone Hotel” ) will be reopened in November of 2018 by the fantastic More Group.  This hotel in its iconic position is set on spectacular grounds within the 6000 acre Victoria Falls Private Game Reserve, just 10 minutes from the Victoria Falls.  The Victoria Falls Private Game Reserve is home to a diverse concentration of wildlife including the “Big Five” as well as giraffe, zebra, antelope, smaller mammals and numerous birds.

How to make this journey of a lifetime a reality…
For more information on how to book your Mammoth Safaris adventure to a resurgent Zimbabwe in search of wilderness, wildlife and an experience of one of Africa’s true safari gem destinations, please contact a member of our sales team via email at info@mammothsafaris.com and visit www.mammothsafaris.com for more destinations and journeys.